Everyone has seen the images of this breed of cow floating around the internet, and most people would probably insist that the images are Photoshopped. They’re not- they are Belgian Blue cows, and they look like they spend 8 hours a day in the gym and the rest of of the day sucking down steroids because they lack myostatin, the chemical that acts as the worst enemy of every gym goer. Myostatin is sort of the demonic gatekeeper to hypertrophy, preventing people from putting on “too much muscle.” Finding a serious lifter who has ever looked at him or herself in the mirror and thought, “I am waaaaay too big” is about as likely as finding someone who hits themselves in the face with a brick every day because they were getting “too good looking.”

Scientists have been looking for a way to inhibit myostatin and increase follistatin (myostatin’s opposing regulatory protein) for years to combat muscle wasting, and every supplement that has professed to inhibit myostatin production has been nothing but a waste of money. That is, until now. Lurking right under our noses in Hershey’s Special Dark chocolate has been the prizefighter who will kick the ass of myostatin with fists made of follistatin- epicatechin. Epicatechin is a flavanol found in dark chocolate that has been found in studies to increase follistatin and decrease myostatin with absolutely no side effects.

Two separate studies have shown the effectiveness of epicatechin in decreasing myostatin and increasing follistatin. The first, conducted on mice,used 1 mg epicatechin per kg of body weight, twice a day. Over two weeks, young mice experienced a 15% decrease in myostatin with no change to follistatin, while the older mice had an 18% drop in myostatin and a massive 30% increase in follistatin. Pumped about these results, scientists then tested the same dose on humans and found an even bigger increase in the ratio of follistatin to myostatin. Their conclusion- epicatechin works harder at blocking myostatin than a cat trying to bury a turd on a marble floor. 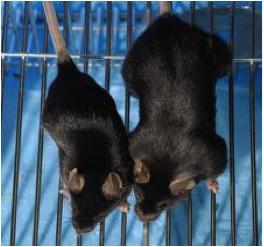 The mouse on the right was injected with pharmaceutical myostatin inhibitors- blocking myostatin makes that kind of difference.

And it gets better- epicatechin’s got other benefits. Not only does it increase hypertrophy, it increased hand strength in the study subjects 7% in only two weeks. Imagine what that could do for your bench- if the results translate precisely, you could go from a 315 bench to 335 in two weeks! Then you’ve got the fact that it increases nitric oxide production, so you’d be walking around the gym after your 335 PR with veins dripping off your arms. Top that off with improved protein synthesis, increased insulin sensitivity, and improved brain health and you’ve got a miracle that would make Louis Pasteur drool with envy.

“But why supplement with epicatechin if the amounts used in the studies can be obtained by eating dark chocolate?” Sure, if you’re a tie-dye wearing unwashed hippie who thinks every ailment can be cured with the application of patchouli oil, you could just nibble on chocolate bars from your local co-op every morning. The research shows, however, that the people dosing at the higher end of the spectrum benefited far more than those at the lower end, and more studies need to be done to determine the optimal dose. There are no reported negative side effects to the use of epicatechin at any dose, so there is no harm in upping your dose beyond the 150-200 mg used in the studies. Moreover, the logic that there is no sense in supplementing epicatechin when you could “just eat chocolate” is ridiculous in a community that supplements practically everything, and all of it could be obtained naturally.

So there you have it- epicatechin looks like the myostatin-slaughtering supplement the world has sought since the 1990s. Science supports it, there is no limit to the length of time you can use it, and there’s no reason on Earth not to. Unless, of course, getting bigger, stronger, leaner, and healthier isn’t on your list of things to do today.

By Chaos and Pain
0 Comments
0
previous next