For many years Red Sky™ has been in a very distinct category of its own. Red Sky since inception has been known as a body numbing, energy packed thermogenic fat burner second to none.

We wanted to introduce a product made for advanced stim users something different. Comparable to the capsule version but different. We tried and tested various formulas - got the feedback of some of the elite team most hated patrons. And...

Enters Red Sky Powder™ a product made the absolute change the high-stim game. Loaded with your favorite high-stim ingredients and enough juice to get you ready to go to the moon.

This is the first product in the Chaos and Pain - Illuminati Project. Over the coming weeks and months we will be dropping another 6 stim powered supplements. You have been warned. Being a freak is the best…

Nothing Will Ever Be The Same!

Built to deliver energy hard and fast. Without a super crash. We tested this with our athletes and a select group of maniacs who all raved about the product.

Red Sky Powder contains premium ingredients such as NeuroPEA™ & RhodioPrime®. As well as a high-stim profile made for Team Chaos Patrons.

Red Sky Powder will give you the right amount of juice to power you through whatever workout you are doing. Not meant for the light hearted or beginners.

It is Finally Here

Looking for a fat burner that will help you see results and feel like a champion? Look no further than Red Sky Powder, the single most comprehensive stimulant based fat burner now on the market. If you don’t believe it, then simply let the formula do the talking while the other brand do the walking. +

This powerful product is loaded with top-shelf trademarked ingredients like NeuroPEA® and RhodioPrime®, which are clinically proven to help you burn fat quickly and efficiently. Whether you're trying to lose those last few stubborn pounds or get ready for swimsuit season, Red Sky Powder can help you achieve your goals. So, don't wait any longer, order your bottle today or keeping being fat, that is up to you. +

RhodioPrime® has been studied in depth through clinical trials. And the findings have been off the charts, they have included subjects seeing reduction in stress and cortisol levels, boost in athletic performance, support for healthy blood sugar levels, improved mood and seen some regulations in appetite control. + 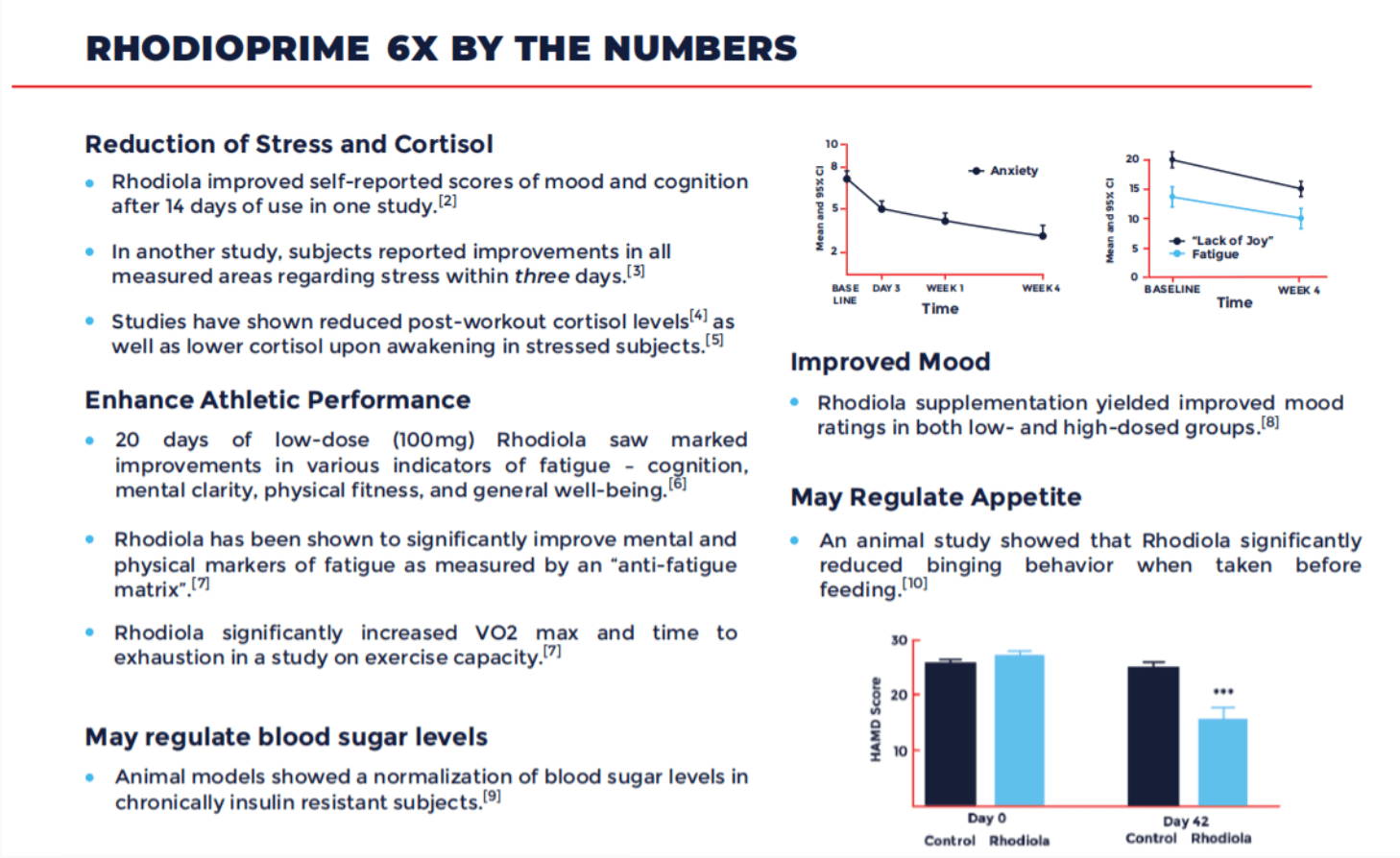 What does Red Sky Powder Pair well with?

So, the magic question? What does Red Sky Powder Pair well with? Here are 3 products which will help elevate more than just your workout!

What is in Red Sky Powder?

L-Carnitine - The nutrient L-carnitine is found in many dietary supplements. It works by transporting fatty acids into your cells' mitochondria, it plays a crucial role in energy production. By burning fats, mitochondria create usable energy within your cells. The amino acids lysine and methionine can be used by your body to produce L-carnitine. It is also necessary for your body to produce vitamin C in sufficient amounts. + (1)(2)

This ingredient is primarily involved in mitochondrial function and energy production in your body. Fatty acids are transported into mitochondria in cells so they can be burned for energy. Muscles contain 98% of your L-carnitine stores, while the liver and blood contain trace amounts. + (3)(4)

L-Carnitine may even protect your brain from damage in some cases. People with alcohol addictions who took 2 grams of acetyl-L-carnitine per day experienced significant improvements in all measures of brain function after 90 days. + (5)

L-Tyrosine - Nerve cells and mood may even be regulated by L-Tyrosine, which synthesizes important brain chemicals. The body produces tyrosine naturally from phenylalanine, another amino acid. + (6)

Tyrosine produces dopamine, which regulates your reward and pleasure centers. Memory and motor skills are also affected by this brain chemical. L-tyrosine is used to produce adrenaline and noradrenaline, which is used for the fight-or-flight response to stressful situations. In response to perceived harm or attack, they prepare the body to fight or flee. L-Tyrosine is also responsible for the production of thyroid hormones and melanin in the body as well. + (7)(8)(9)

It is believed that L-Tyrosine can reverse the negative effects of stress on your reasoning, memory, attention, and knowledge. Tyrosine significantly improved working memory in 22 women when compared to placebo during a mentally demanding task. Concentration and following instructions depend heavily on working memory. + (10)(11)

Taurine - Taurine is an amino acid that contains sulfur naturally. Your brain, eyes, heart, and muscles are particularly concentrated with it. Among the main functions of taurine in the body are maintaining your cells' hydration and electrolyte balance, regulating minerals such as calcium within them, supporting your central nervous system, eyes, and immune system, and supporting antioxidant activity. + (12)(13)

Taking taurine supplements has been shown to improve blood pressure, heart function, and blood fat levels in people with heart conditions such as heart failure. It may even protect against heart disease at high levels. + (14)

Caffeine Anhydrous - You can improve your mental and physical performance with caffeine. Exercise performance, focus, and fat burning can be significantly improved by a single dose. + (17)

Caffeine improves focus and energy while reducing tiredness by activating areas of your brain and nervous system. Caffeine increases circulating epinephrine (adrenaline), the hormone responsible for the "fight or flight" response. Caffeine may enhance your body's ability to burn fat by promoting lipolysis, or the breakdown of fat in fat cells. Exercise "highs" that people experience after working out can be attributed to beta-endorphins. Although the exact mechanism of caffeine's effects is unknown, it may improve muscle performance by activating the central nervous system. A study found that caffeine increases thermogenesis, or heat production, which raises your body temperature and helps you burn more calories. Due to increased fat burning, caffeine may also spare muscle carb stores. Performance can be improved as a result. +(18)(19)(20)(21)

RhodioPrime (Rhodiola Extract 6% Salidroside) - Rhodiola is an adaptogen, meaning it helps the body adjust to stress by regulating neurotransmitter, enzyme, and hormone levels. Rhodiola is an adaptogen that helps the body resist biological stress. Rhodiola has many benefits, such as enhancing mood, endurance, energy, and cognitive function, because stress affects everything. + (22)

According to studies, rhodiola increases antioxidant activity and reduces fatigue during sports. Rhodiola has also been shown to improve exercise performance by decreasing perceived exertion, or how hard participants felt their bodies were working. + (23)

Raspberry Ketones - Molecularly, ketones are very similar to capsaicin, the active ingredient in chili peppers, and synephrine, the stimulant. These molecules have been shown to boost metabolism in studies. Researchers hypothesized that raspberry ketones might have the same effect. + (27)

Based on preliminary studies of fat cells, raspberry ketones increased fat breakdown, mainly by increasing the sensitivity of the fat-burning hormone norepinephrine and also by increasing adiponectin release. + (28)

Theobromine - While theobromine stimulates the heart, it also has a mild diuretic effect and improves blood flow around the body, resulting in a reduction in blood pressure. A potent bronchodilator, theobromine opens up the airways naturally. Through improved blood flow, theobromine supplementation may provide cardiovascular and cognitive benefits. + (29)

This ingredient also boosts mood and Improves muscular endurance and muscular power Output. There is improved insulin sensitivity when present and increased mitochondrial cristae and angiogenesis. + (31)

Theophylline Anhydrous - Aside from relaxing smooth muscles in the airway, theophylline stimulates both the rate and force of heart contractions. A small amount of theophylline and theobromine is found in tea. There are several ways in which they stimulate the body. Natural theophylline is derived from teas and has relaxing and diuretic properties, as well as stimulation of the heart and central nervous system (CNS). + (32)

Di-Caffeine Malate - A strong ionic bond binds caffeine to malic acid. Dicaffeine Malate is made up of caffeine and malic acid. About 75% of this ingredient is caffeine, and 25% is malic acid. Caffeine digestion is eased by malic acid, which promotes a longer caffeinated effect, reducing energy crashes. Fruits and vegetables naturally contain malic acid. The body also produces it after carbohydrates are broken down in the digestive system. Additionally, malic acid stimulates energy production in the Kreb cycle, increases endurance, and may reduce muscle fatigue. + (33)

GBB (gamma-butyrobetaine ethyl ester HCL) - L-carnitine is primarily involved in mitochondrial function and energy production in your body. As a result, it helps transport fatty acids into mitochondria, where they can be burned to produce energy. Your muscles contain 98% of your L-carnitine stores, along with traces in your liver and blood. When your body produces its own carnitine, it converts Gamma-Butyrobetaine ethyl ester HCl into L-Carnitine. + (34)(35)

Carnitine supplements may improve exercise recovery, according to some evidence. In addition to increasing oxygen supply to your muscles, it may also increase blood flow and nitric oxide production, which can reduce fatigue and discomfort. In addition to transporting oxygen throughout your body and muscles, L-Carnitine may also boost red blood cell production. + (36)(37)

Bioperine - Several nutrient groups have been clinically tested with BioPerine, including fat-soluble vitamins (ß-carotene), water-soluble vitamins (vitamin B6, vitamin C), selenoamino acid [L(+)-Selenomethionine], coenzyme Q10, and has been shown to significantly increase the bioavailability of supplements by increasing absorption. When co-administered with BioPerine, herbal extracts such as curcumin have also been shown to be more effective. + (40)

Alpha Yohimbine - Yohimbine can reduce lipoprotein lipase activity in visceral adipocytes, increase lipolysis in refractory gynoid fat depots, and improve the impaired lipolytic response to exercise when administered pre-exercise. Erectile dysfunction can also be treated with yohimbine, which is also an aphrodisiac. Additionally, it acts as a general stimulant. + (42)

Come check out the Red Sky Powder review by the Original Bad boy of Supplement Review. Posting stuff live from the FDA Proof bunker. And delivering the heat, always keeps it real show him some love and go check out his stuff.

So many of you asked..."What does GGH think about Red Sky Powder?" Why don't you go watch his video above and check out the awesome love he showed this product. GGH always keeps it real go check out his channel for awesome reviews!